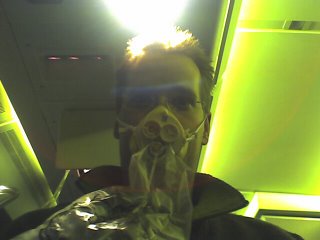 Blogebrity co-founder Jeremy Hermann was on of the passengers on the Alaska Airlines jet that depressurized at 30,000 feet, wrote about it–and took pix with his Treo.
Jeremy writes:
“Nothing can describe the helpless feeling you go through during a time like this, when you are absent any control, you cannot breathe, and everyone around is stunned into fear. It all started with a loud bang – the cabin air began to swirl and the engine sound became deafening. As a GA-VFR pilot, I knew something was terribly wrong. As the smell of acrid AV-gas/JP4 and burning plastic filled the cabin, it created more fear in the eyes of the holiday passengers around me. We were all gripped in silence, surrounded by the white noise from the engines that eerily engulfed the plane into a surreal atmosphere. And as the oxygen masks deployed from the ceiling in a familiar, video-esque manner, we all grasped them in fear – trying to figure out how to breathe through the flimsy pieces of plastic…”
Susan sez: Yeah, the coverage this story received–and the big media pickup –show citizen journalism is moving into the mainstream, but my main impression is gut-chilling fear at the situation–and relief everybody was okay.
Update: Seems like some folks using an Alaska Airlines IP address had some mean things to say to Jer…