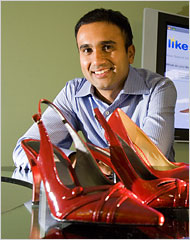 The NYTimes has an article on Munjal Shah’s implementation of photo similarity search as a shopping tool, with the headline Shopping Site Offers a Way to Raid a Celebrity’Closet. This, of course, is Like.com, the newly launched incarnation of Riya‘s photo algorithms, which apparently doesn’t succeed in precisely identifying a person you know across thousands of photos, but works great on items–and people–that look like others.

Bob Tedeschi, the reporter, writes: “Like.com represents a fall-back plan of sorts for Mr. Shah, who originally used the technology behind Like.com to create Riya, which helps users organize their digital photos. That service has been popular among users and investors, having attracted $19.5 million from venture capitalists including Bay Partners and Leapfrog Ventures, but Mr. Shah said it had a doomed business plan, because there were not enough ways to make money from it.”

Susan sez: The picture slays me, but I admire the realization that these super cool tools need commercial applications–and hope Munjal and his team generate a few more interesting products off their algo.